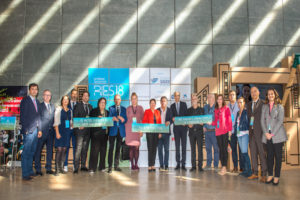 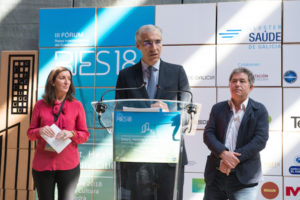 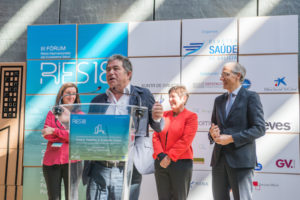 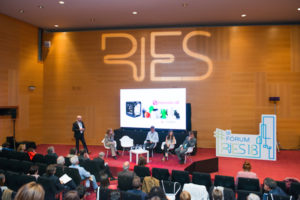 The RIES18 Forum president, Lucía Saborido; the president of the Galician Health Cluster Rocío Mosquera; the Minister of Economy, Entrepreneurship and Industry of the Xunta, Francisco Conde López; and the Mayor of Pontevedra, Miguel Anxo Fernández Lores, officially opened the III RIES18 Forum, which was held from October 24 and 26 in the city.

Under the slogan “Smart, healthy and friendly cities: guarantee a healthy life and promote well-being for all ages“, this international congress brought together nearly 300 experts from around the world in the sector on its central conference this Thursday from the socio-sanitary and health fiel, in the Pazo da Cultura, to discuss the ideal city model in which to live.

Mosquera stressed that the objective of this forum is, mainly, “to define the concept of livable cities, as alive and humanized as possible.” For this reason, she described this international meeting as “an essential and benchmark event in the Smart Cities sector that consolidates our intention to encompass both the work of companies and the systems that work to improve the lives of people in cities.”

“Friendly and healthy cities are not just technology,” she said,” but much more. It is organizing resources and work, cooperation and efforts to reach the objective we are debating here: cities at the service of people ”.

Saborido, on her part, recalled that the III RIES18 Forum is an international and intergenerational meeting with which, she assured, “we seek to address the challenges, opportunities, advances and developments that are taking place in the health ecosystem in the autonomous community, state and international.

The biggest challenge of this event, she explained, “is to analyze the great impact that environments, spaces and infrastructures, in this case of cities, have on improving the health and quality of life of its inhabitants.” Thus, the forum presented the latest advances, innovations and solutions from the healthcare and health sector in Galicia, Spain and the rest of the world, to make cities the healthiest, most sustainable, livable and integrative communities possible.

On the other part, the Minister of Economy, Entrepreneurship and Industry, Francisco Conde López, assured that, “the best way to contribute to the constitution of smart, walkable and friendly cities is by safeguarding and promoting public services and attention to citizens who , definitely generate growth and sustainability ”.

In “four words,” he said, smart cities are those that “are people-centered.” They are “the driving force”, he commented, “to which we have to aspire” and in which the ecohealth system, “plays a very important role together with technology, which, if we put it at the service of people, can provide us with the tools and the way to achieve that desired change towards where cities should walk. ”

Conde López said that, to achieve smart cities, the administrations “have to get adapted to the change that this requires and provide solutions.” In this sense, he emphasized on the fact that the Xunta “continues to provide responses to the needs of people in urban communities by developing service, business, and communications for people and promoting active aging.”

“If we are able to establish a specialization of the administrations in the field of smart cities to promote the growth of people, their quality of life and, in addition, use biotechnology in a humanized way”, he concluded, “we can find the necessary balance between the population and the city ”.

Fernandez Lores celebrated that the Forum is organized, precisely in Pontevedra, a “walkable” city that, “when I came to the mayor’s office,” he insisted, “as it happens in most cities today, they are ill,” he said, resorting to his quality, not so much as a politician, but as a doctor.

Thus, for the mayor of Pontevedra, it is necessary to “heal the cities”. A process that happens, ” by reducing as much as possible the cars in public spaces” that “are also public services, of all people.” That is why he advocated, in the first place, that administrations “start making decisions”.

Then “it will be the technical departments and the citizens themselves who put these decisions into practice and advance in this healing that the cities need”, but the fundamental basis and the beginning of the change towards smart, walkable and healthy cities, said the councilor, “lies in the initial political decision ”.

In this case, he concluded, “many things can be done from all areas, especially from the municipal one, such as promoting the social and health sector, communications and infrastructure, reducing accidents, avoiding noise and pollution” . For this reason, he encouraged institutions, administrations and entities to influence the change towards the new type of ideal city that is defined in meetings such as this RIES18 Forum.