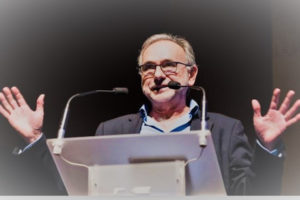 Joan Cornet is the Manager of the ‘Digital Health Observatory. ECHAlliance’. He has been Manager of the ‘mHealth Competence Center. Mobile Wolrd Capital ’; founder and first CEO of ‘BIOCAT i Ticsalud’; senior official in the Commission and the European Parliament; and mayor of Manresa between 1979 and 1986.

The smart city concept is promoting the humanization, personalization and service of technology for citizens’ health. For all people and for all ages. How would you define a smart city today?

The Smart City concept encompasses several important industries within the transformation power of cities. We are talking about transport, waste, the digitization of which would allow us to generate much more effective forecasting models when managing our cities, e-Health, giving universal coverage to our citizens with better tools and in less time, or the energy, one of the industries with the highest efficiency range from now to the future, lampposts in cities that consume less, models of energy recovery or efficiency improvement in high impact renewable energy.

Smart Cities are the result of the increasingly pressing need to guide our lives towards sustainability. Thus, these cities use infrastructure, innovation and technology to reduce energy consumption and reduce CO2 emissions.

There are different parameters by which one city is valued more than another. For this, 10 key dimensions are considered: governance, urban planning, public management, technology, environment, international projection, social cohesion, mobility and transport, human capital and economy.

In this sense, “Smart Cities” are a necessary revolution of special importance for the proper functioning of our country in the future.

What resources and tools exist to transform cities into smart, healthy and friendly, humanized and personalized ones?

In many ways, the smart city concept is simply good urban planning that incorporates advances in digital technology and new ideas in the concepts of relationships, community, environmental sustainability, participatory democracy, good governance and transparency of the old city. Furthermore, the smart city means not only designing cities in a more meaningful way, both economically and ecologically, but, above all, it means improving people’s daily lives.

Technologies that will solve the challenges of urbanization and infrastructure exist today so that the inhabitants of many cities can enjoy the benefits in the future.

In fact and qualifying and insisting on this aspect, to what extent does technology influence and define these types of cities?

It really comes down to one: the Internet of Things (IoT).

Smart city technology. The key technology behind the success of smart city initiatives, be it to improve pollution levels or traffic conditions, is the IoT. The IoT is a network of connected physical devices, such as vehicles or appliances, that allow these “things” to connect and exchange data. This, in turn, creates never-before-seen opportunities to converge the physical and the digital, through data analysis, to improve efficiency (in both the public and private sectors), drive economic benefits, and improve media. of life.

How should the two global demographic trends that will mark the evolution of all the cities on the planet, according to the WHO and the UN, face this type of city: active aging and increasing urbanization?

Cities are often associated with an increase in younger populations due to their predisposed nature to attract people of working age in search of employment and educational opportunities. However, the vast majority of the world’s cities are projected to show a faster increase in the over-65 segment, as opposed to their working-age populations (15-64) during the 2016-2030 period . By 2030, 15% of the world’s urban population is expected to be over 65, equivalent to 766 million.

Successful cities will be those that know how to integrate a multitude of citizens from generally rural areas or those with less possibilities of finding a job and managing the elderly. Two great challenges.

Currently, there are not many examples of success, except in Japan. There are many plans, but reality shows that it is not always carried out. We know from clinical evidence that 8.5% of people over 50 develop pathologies such as vascular dementia and Alzheimer’s, few cities have developed and executed plans to care for this growing population.

How to dispose of new technologies in smart cities, so that they serve health and all people of all ages?

There are a huge variety of technologies that have been proven to be effective and safe. The cost as it happens in domestic devices decreases progressively. The problem does not lie in the technologies but how we “transform” our cities. In the last decades our society has prioritized individuality, losing the sense of “tribe” that is where we come from.

We have created the illusion that our efforts have to enter our person and our family. The goal is to have a comfortable house or apartment and a car or more. It is a legitimate and logical objective, but insufficient. I may have a late-model, super-fast car, but what good is it if there are no proper streets, roads, or highways? What if I don’t use the car, do I have quality and efficient public transport? How can I be healthy if there is a high level of pollution in my city?

We have fallen into the trap of the narcissistic home, self-sufficient and that prefers to isolate itself from pubic space. Public services such as education and health and social services are essential for our well-being and for achieving an adequate quality of life. The list would be long, for example, the issue of security in the broad sense of the term is very important for everyone, such as health and social services.

Transforming our cities requires a certain social pact. Just as in our families we reach agreements (or not …) about where we go on vacation, where our children will study, what car we buy or what type of housing we want to obtain, also a city must be able to analyze its objectives, its needs, their priorities, etc. and align them with existing resources, both human and budgetary.

Then when there is a city transformation program, it is when we have to identify what technologies can help us implement this transformation. We cannot delegate all of this to our municipal representatives, who are undoubtedly very important to carry out this transformation. Furthermore, we must create a citizen movement, with local organizations and individual citizens that collaborate to achieve a true smart city.

What proposals discussed at the RIES Forum can be implemented in a real way and from now on?

In line with my previous answer, the fact that the RIES Forum puts the topic of “Smart Cities” on the table is an important step. It is about identifying needs and wants of citizens, then analyzing what technologies can help us achieve them.

I cannot advance in what initiatives of the RIES Forum can be implemented in a real way, because I do not know all of them thoroughly. What I am sure of is that the RIES Forum can help create specific leaderships, both in the commitment to transform our cities and in leading the development of appropriate technologies.

What project of this type of city do you especially like?

There are a large number of popular and culturally rich cities that have smaller populations, which often make residents have a higher standard of living. Barcelona, ​​Sydney, Berlin and Vancouver have less than five million residents, but they are very popular options for city life. There are also some comparatively very small cities with great cultural, historical, or political reputations, such as Sarajevo (314,000), Edinburgh (502,000), and Venice (631,000), proving that small cities can be very important regardless of the size of their population. .

I am convinced that, in Galicia, which is already working to transform its cities, it can be a benchmark in Spain and Europe. It is a matter of leadership …