The researcher, professor, expert in intelligent control of complex systems and professor of the Sorbonne Territory, Carlos Moreno, together with the current French Prime Minister, Edouard Philipe and the French economist, politician and intellectual, Jacques Attali were the organizers of the LH Forum Le Havre Positive Economy International, through the ‘Positive Planet’, a foundation chaired precisely by Attali.

A meeting in which Moreno had the mayor of Pontevedra, Miguel Anxo Fernández Lores, as a speaker who was able to present his model of the city on the closing day.

Now, Moreno will be able to visit Pontevedra thanks to the Galician Health Cluster, an entity that organizes the III RIES18 Forum between October 24 and 26 in the city and which has made the researcher participate as main speaker at the event.

Through this link you can read a chronicle on the Le Havre forum of the Diario de Pontevedra. 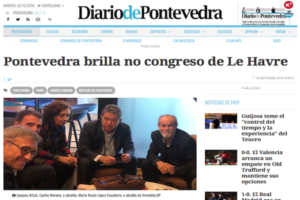